In 1921, a basketball player named Charles H. “Chuck” Taylor walked into Converse complaining of sore feet. Converse gave him a job, and he worked as a salesman and ambassador, promoting the shoes around the United States.

The Converse Chuck Taylor All-Star is the most successful shoe in history with over 750 million pairs sold worldwide.

Converse shoes popularity grew in the punk rock music scene in the late 70’s. In the last two years their is a growing market in the various younger scenes, such as hip hop, indie music, and the growing emo scene.

The classic design has never changed since Chuck Taylor wore them himself, however they can be found in may colours and with different prints. 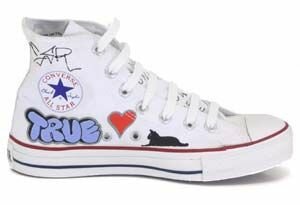 See the full range of mens and womens shoes by Converse now.