Rockabilly - Behind The Style As we continue our look through all different Gothic styles, this month we feature Rockabilly for the people who love fifties style clothing with an extreme edge, and we find out more from Kates Clothing about this amazing style. What are the origins of the Rockabilly style? Inspiration is drawn from 1940's and 50's style and taken to the extreme. With a resurgence...

Adidas Skateboarding Collection The Adidas Skateboarding shoe was originally endorsed by Robert Haillet, but later renamed after tennis great Stan Smith, becoming one of the best selling shoes of all time, selling well over 30 million pairs. With a lightweight yet durable upper and an outsole with amazing board feel, the Stan Smith quickly found its way onto the feet of many a skateboarder. It was...

Sin Star Clothing T-Shirts Sin Star Clothing is a new brand that appeals to a broad audience, including the band scene, urban sports fans such as BMX and Parkour, and the everyday Average Joe. The brand’s message is ‘Armour Against Authority’ as they know that life is not easy, and they urge fans to realise their dreams in life. Sin Star Armour T-Shirt. British flag bearing the brand...

Alternative Winter Coats If you are sick of the same old High Street brands and want to grab something unique packed full of attitude then take a look at a winter coat from an alternative fashion brand such as Hell Bunny, Living Dead Souls or Poizen Industries. So whether you want to look retro, ravishing, or devilishly dark there is a cosy winter coat for you! Poizen Industries Juku Coat.... 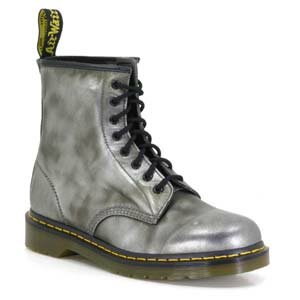 Klaus Martens was a doctor in the German army during World War II. While on leave in 1945, he injured his ankle while skiing in the Bavarian Alps. He found that his standard-issue army boots were too uncomfortable on the injured foot.

While recuperating, he designed improvements to the boots, with soft leather, and air-padded soles. When the war ended, Dr. Martens made himself a pair of boots with the now-famous air-cushioned soles.

The first Dr. Martens in the United Kingdom came out on April 1, 1960, with an 8-eyelet, cherry-red, Nappa leather design. They were popular among workers such as postmen, policemen and factory laborers. By the late 1960s, skinheads started wearing Dr. Martens boots, and street gangs made the oxblood-red boots a trademark style.

In the 2000s, Dr. Martens became sold exclusively under the AirWair name, and come in dozens of different styles, including conventional black shoes, sandals and steel-toed boots.